Page created by Ida Gomez
Click to read more
If your browser does not support JavaScript, please read the page content below:

Soft Contact Lenses: The first 50 years Along with the E Type Jaguar, the first man in outer space, the Berlin Wall, and the Beatles this year marks the 50 th anniversary of soft contact lenses. Some will be thinking where did all that time go whereas newer practitioners who have only ever known disposable soft lenses will be wondering what all the fuss is about! These are some highlights of the past 50 years of soft contact lenses. Background 1950s The young Czech chemist Otto Wichterle, was on board a train and became involved in a conversation with a fellow passenger about those features which the ideal prosthetic material might have.

He described, perhaps for the first time, a water swellable gel. Later he was called upon by a Czech government department to show them this material but needed to explain that this was just a theoretical concept. 1952 Launched into action, Wichterle accepted the help of one of his colleagues, Drahoslav Lim, and together they produced hydroxyethyl methacrylate or HEMA.

1953 Wichterle thought HEMA might be a suitable material for contact lenses and gained his first patent for soft contact lenses. 1954 This material was first used in as an orbital implant. 1956 Walter Becker, a Pittsburgh optometrist, developed silicone elastomers. 1957 Wichterle produced around 100 soft lenses from closed polystyrene moulds but the edges split and tore as the lenses were removed. In addition, they required hand finishing with a file! He was determined to find a better way. Otto Wichterle (1913-1998) was born in Prostejov, Northern Moravia to a wealthy family involved in the production of cars and farming equipment.

He received his first doctorate in 1939, the year he produced his first synthetic polymer, and became Professor of the Department of Plastics in Prague University in 1949. [1]

1960s -The early developments 1960 ‘Hydrophilic Gels for Biological Uses’ by Wichterle and Lim was published in Nature [2] 1961 Christmas Eve. Wichterle built a machine using a meccano set and a bicycle dynamo belonging to one of his sons, and a bell transformer. All the moulds and glass tubing needed to dose them with monomer were also individually made by himself. Christmas afternoon. Using the machine on his kitchen table. Success! He tried the lenses in his own eyes and although they were the wrong power they were comfortable.

New Years Day. He completed his patent application and produced over 100 lenses by spin casting.

He built several new machines from meccano with increasing numbers of spindles which required the stronger motor taken from his gramophone. The early experimental lenses were called Geltakt and the later production lenses SPOFA. 1962 The basic carousel machine was developed for mass production and the first soft lenses became available in the UK. 1964 Otto Wichterle attended the second Royaumount seminar in France, organised by Pierre Rocher, to deliver the world’s first lecture on soft lenses. Rocher was one of the first contact lens experts to visit Wichterle to investigate soft lenses. [3] 1964 Kyoichi Tanaka in Japan became the first in Japan to make soft lenses.

In 1954 he had heard about the development of HEMA and in 1960 about the development of soft lenses. Kyoichi had been working on the properties of PVA (poly vinyl acetate) which he later abandoned in favour of HEMA. [4] 1965 The National Patent Development Corporation (NPDC) of the USA bought the American rights to the Czech lenses which they sub-licensed to Bausch & Lomb. A carousel machine was shipped to Rochester, New York where work was started to improve production yield. B&L had not been involved with contact lenses since before WWII so were more able to see the potential and grasp the opportunity.

More than 3,000 patients had now been fitted with soft lenses in Czechoslovakia.[5] Allan Isen founded Griffin Contact Lenses to make lenses from Bionite, the first higher water content soft lens, invented by Ken O’Driscoll, a polymer chemist from the University of Waterloo.[6] 1966 Walter Becker was granted US patent 3,228,741 for silicone rubber contact lenses. These would later be developed by Breger Müller-Welt, Dow Corning, Wöhlk and Bausch & Lomb. Although they gave huge oxygen transmissibility, they tended to stick to the eye and were never widely successful as contact lenses despite their therapeutic applications.

By this time over a hundred thousand soft contact lenses had been fitted in UK. [7] 1967 A soft lens symposium was held in Prague attended by 57 delegates from outside Czechoslovakia.

1968 Bionite was first used on pathological cases but subsequently acquired by CIBA Vision and used as vifilcon in Focus visitint. At about this time Dominic Ruscio of B&L selected Pyrex

serum vials for lens storage as they could be autoclaved. [8] By the end of the 1960s nearly two hundred thousand soft contact lenses had been fitted in the UK, available from such firms as NuSyte, Nissel, Contactalens and GT Optics. Many practitioners, however, still favoured PMMA hard lenses because of their greater reproducibility, lower cost and easy availability. 1970s - The first commercial lenses 1971 On 18th March B&L, after an investment of over $18 million to bring Soflens to the market was granted FDA approval.

They achieved sales of $1 million in the first six months! [9] Hydron Lens Ltd in the UK and Hydron Europe were formed and began production of lathed lenses in a joint venture with Smith & Nephew (S&N). Hydron made the material and buttons whilst S&N and Essilor made the actual lenses. In the late 1960s John de Carle had begun to think that a material with the same water content as the cornea would work better. With Geoffrey Galley he formed Global Vision in 1971 to manufacture Permalens, the first contact lens designed for continuous wear. Sauflon was developed by Donald Highgate and John Frankland for Contact Lens Manufacturing whilst, Titmus Eurocon and Wöhlk developed respectively Weicon and Hydroflex lenses both variations on HEMA.

1972 Cooper Laboratories bought Global Vision forming the start of Coopervision. 1975 B&L were now producing 20,000 lenses every day for 73 countries. [10] They sold in the UK for £12.50 each. Meanwhile, Penhryn Thomas in Australia patented a soft toric design with a prism free optic zone. 1979 Kyoichi Tanaka was granted the first silicone hydrogel (SiH) patent, [11] Permalens became the first soft lens with FDA approval for 30 nights continuous wear. One of the first lathe cut ultrathin lenses, Hydron Z6 with a central thickness of 0.06mm, was also introduced.

[12] He used a new wet cast moulding system, Stabilised Soft Moulding, which gave far better reproducibility. Bay had grown increasingly concerned about the problems with extended wear lenses and decided that the best solution was to discard them on a shorter, regular basis. He and his team developed the Danalens, the blister pack, weekly or two weekly extended wear, monthly payments by direct debits and home shipments. In the USA, thin membrane CSI soft lenses were launched by Syntex and following six years and $7 million of development, Tom Shepherd filed his patent application for the cast moulding of soft lenses.

1983 Vistakon bought the Stabilised Soft Lens Moulding technology and drew on their extensive manufacturing ability to develop the technology. They improved the blister and changed the material to etafilcon A which they had acquired with the purchase of Frontier Lens Inc to develop a new disposable lens. [13] 1984 Biocompatibles was founded by Dennis Chapman of the London Hospital. He had discovered recognised the advantageous properties of Phosphoryl Choline, a biomimetic material, which he later used in Proclear contact lenses. 1986 Wesley-Jessen produced the first coloured soft lenses with a dot matrix pattern.

1987 The world of soft lenses changed forever with the launch, in Florida, of the Acuvue Disposalens. [14] 1988 Acuvue Disposalens was sold in the rest of the USA and the UK. Further disposables followed including SeeQuence and Medallist from B&L and NewVues from CIBAVision for weekly extended wear. At this time Ron Hamilton and Bill Seden announced their new moulding technique which involved using part

of the mould as the lower portion of the blister pack. This vastly reduced the cost of production and made daily disposability viable. 1990s - More disposables and complex designs 1991 Wesley-Jessen introduced the first coloured soft toric.

1992 The environmentally friendly disposable Lunelle Rythmic was launched. This was designed by Mike Sealey and had a 73% water content with all components re-cycleable and with the lens blister forming a disposable case. CIBAVision launched another first, the disposable Focus Toric, as well as starting their SEE 3 project involving CIBA Geigy (Switzerland), CIBAVision (Atlanta) and CCLRU (Australia) to develop a new material. [15] 1993 The first disposable tinted lens, Freshlook Lite tint, became available.

1999 Major changes came about with the arrival of the first silicone hydrogel lenses, Purevison and Night & Day, designed for monthly extended wear. [16] 2000s - Silicone hydrogels and the development of daily disposables 2000 CIBAVision introduced the daily disposable Focus Progressive, whilst J&J launched the ultrathin Acuvue Toric lens. Over 30,000 patients in more than 40 countries were wearing Night & Day lenses for up to 30 nights. Ron Hamilton launched Daysoft®uv, the first daily disposable with a UV filter.

approval for Biofinity. This was a ‘second generation’ SiH material with a high Dk/L, high water content and reduced modulus for greater comfort without using wetting agents. 2005 Cantor & Nissel produced the first lathed SiH lenses, whilst B&L launched the PureVision Multifocal, the world’s first SiH multifocal. 2007 CooperVision made a restricted range a thing of the past with the launch of the Proclear Toric XR, the Proclear Multifocal XR and the Proclear Multifocal Toric which gave spherical powers of +20.00D and cylinders up to 5.75DC.

This represented UK production of 557 million lenses and world production of some 10 billion lenses per year. Global Industry Analysts now estimate the global soft contact lens and solutions market will exceed $11.7bn (£7.5bn) by 2015. Not bad from a meccano set!

Disposable soft lenses in some form are now the first choice for nearly all new contact lens wearers. Soft lenses have evolved from small home style innovation to a multi-million pound industry; from specialist medical application to commodity; from thick low Dk HEMA to high Dk silicone hydrogel; and from heat disinfection to multipurpose solutions. Finally, with the advent of daily disposables, Otto Wichterle’s original concept that once worn, a soft lens should simply be thrown away has now come to pass.

For further information about the development of all contact lenses please see Contact Lenses; The Story References 1. 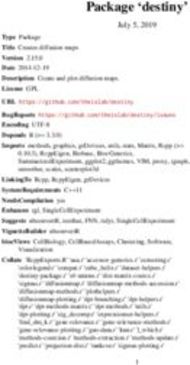 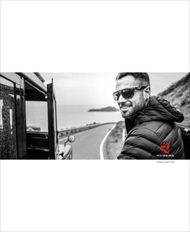 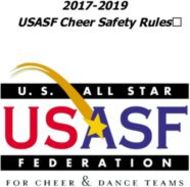 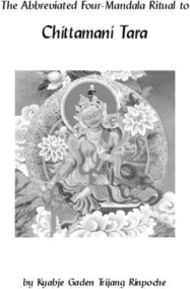 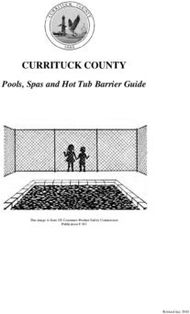 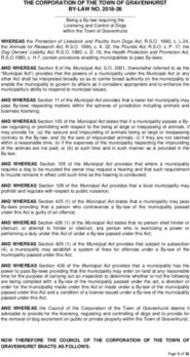 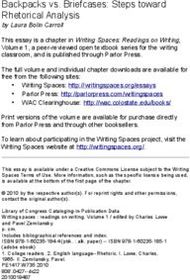 Backpacks vs. Briefcases: Steps toward Rhetorical Analysis →
You can also read 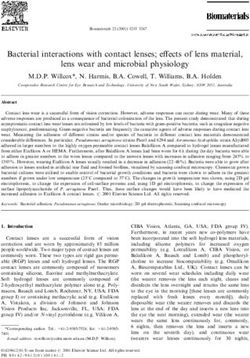 Power Profiles of Multifocal Contact Lenses and Their Interpretation → 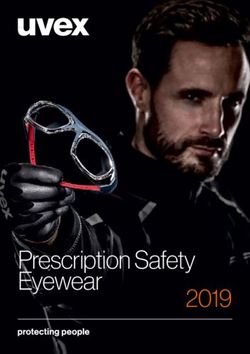 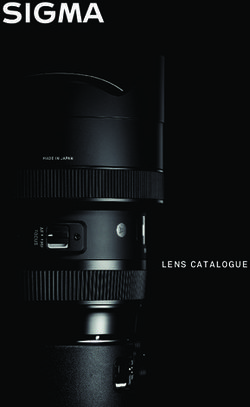 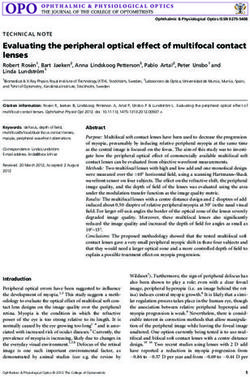 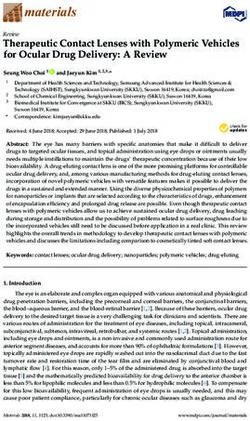 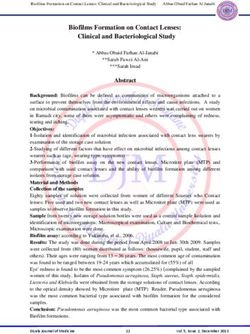 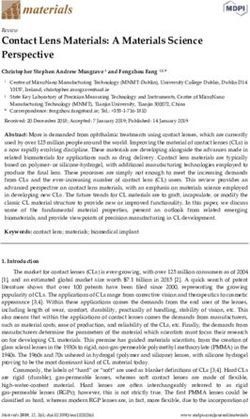 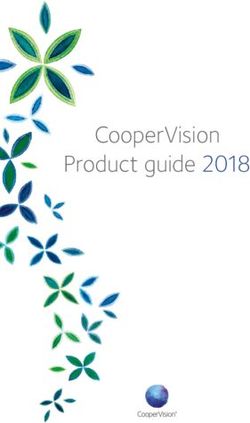 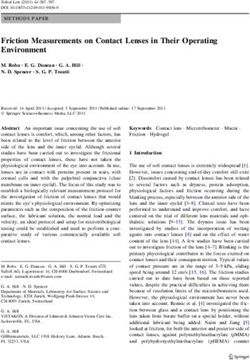 Friction Measurements on Contact Lenses in Their Operating Environment → 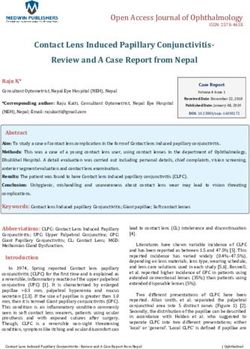 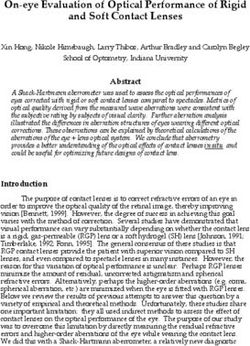 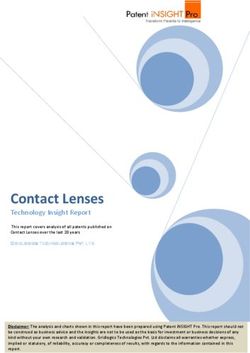 Contact Lenses - Technology Insight Report →
Share this page with your friends
Select All
Embed this page to your web-site
Select All
Going to next pages ... Cancel
Error occurred
Please sign in for this action