Recycling is Not Enough Format - Global Alliance for Incinerator

Page created by Michael Yates
Click to read more   ☰
If your browser does not support JavaScript, please read the page content below:

Recycling is Not Enough Format - Global Alliance for Incinerator

GAIA January 22, 2018 1 RECYCLING IS NOT ENOUGH It’s time to rethink how to solve the plastic waste crisis By GAIA/Zero Waste Europe In collaboration with Break Free From Plastic, Consumers Association of Penang (Malaysia), Friends of the Earth Europe, Ecology Center (U.S.), Story of Stuﬀ (U.S.), BaliFokus (Indonesia), China Zero Waste Alliance Already, China’s ban is driving eﬀorts to improve recycling quality, build more domestic recycling capacity, and create better standards in the regions that export the most plastic. However, the ban is also sparking negative outcomes: some countries are threatening to increase plastic incineration and the burden of plastic waste processing is shifting to countries in South and Southeast Asia.

As a result of extensive research with core partners around the globe, our findings indicate that ultimately, none of these adaptations address the elephant in the room -- the sheer quantity of plastic being produced-- and ignore the most effective solution: to simply make less of it. Our oceans, fish supplies, and climate depend on our ability to do so.

China Says Enough is Enough, Closes its Borders to Foreign Plastic Waste Until recently, countries in the Global North dealt with their plastic waste problem by shipping significant portions of it to China. But in January of this year China began a new ban on plastic scrap import, shaking local recycling systems worldwide. The ban has exposed global dependence on plastic waste trade for recycling systems. In 2016, 15 million tons of plastic was traded globally. China was the top importer and main consumer worldwide, receiving 51% of all plastic waste traded. Unsurprisingly, the United States is the largest national plastic waste exporter in the world, and the 2nd largest plastics consumer, and the EU is the largest regional exporter.

GAIA January 22, 2018 2 Plastic is the Problem Plastic, and especially single-use plastic, is an increasing environmental threat worldwide. Though plastic has only been used widely for a relatively short period of time1, it has managed to colonize our daily lives and pollute the environment, much of it in the form of packaging. The plastic trend is far from over—in fact, plastics producers are planning on flooding the markets with a massive scale-up over the coming decades. Plastic Production Explosion
Global annual production increased from 2 million tons in 1950 to 381 million tons in 2015: 2.5 times the compound annual growth rate of the global gross domestic product for that period.2
Projections are to further increase the growth rate: by 2050, it is estimated that the total volume of plastic ever produced will reach 34,000 million tons (Mt)—over four times what has been produced so far.

We Can’t Recycle Our Way Out of Plastic Pollution Recycling is often proposed as the primary solution to the plague of plastic waste. But in reality, recycling will never compensate for the high use of plastic on its own. Recent data shows that only 9% of all plastic ever discarded since 1950 has been recycled, and the rest became pollution in landfills, dumpsites, incinerator emissions, or oceans, where it will remain for millennia.5 Europe has the highest collection rates of plastics for recycling in the world, at 29.7%; China’s rate is 22.8%; while the U.S. only collects 9.5% of postconsumer plastic for recycling.6This means that in the best case scenario over two-thirds of the plastics we discard currently fall out of the so-called Circular Economy, ending up in incinerators, landfills, cement kilns, dumpsites, oceans or the environment.

Despite some eﬀorts to curb plastic pollution through mechanisms like bans and fees, overall, governments have been unable to staunch the increasing flow of plastic. Companies are not only designing plastic to be diﬃcult or impossible to recycle, but the overwhelming flood of new plastic into the market thwarts any chance of recycling keeping up.

Evolution of annual global polymer resin and fiber production Nearly all plastics are made from fossil fuels, and oil and gas companies see plastics as the new frontier.
Currently, 6% of total oil production is used by the plastic sector, and it is estimated that it will represent 20% use by 2050. Plastic would represent 15% of global annual carbon budget (up from 1% today).3
In the US, 264 new plastics-related facilities and expansions are currently planned to use gas from the shale fracking boom.4 by 2050, plastic production is expected to quadruple.

Limits to Plastic Recycling
Companies are choosing to use lighter weight plastic, or a combination of materials, colors and additives that are hard to recycle, or are simply not recyclable at all.
With the best available recycling technology for the current mix of plastics used, the maximum recycling level would only be somewhere between 36% and 53%.7
Even if the global recycling rate were to reach the theoretical best possible rate of 53% by 2050, projections for overall increase in plastic production mean the amount of nonrecycled plastic polluting the environment would still double.8 New Plastic Kills Recycled Plastic Economy
Overproduction of virgin plastic leads to low market prices, particularly as prices don’t factor in the externalities of plastic production, such as climate impacts and pollution from oil and gas extraction.
Low virgin plastic prices outcompete recycled plastic, and there are no mechanisms in place to ensure manufacturers will use recycled plastic content in their products.

Bad waste management undermines recycling
Incineration, “waste-to-energy,” and “plasticto-fuel” methods compete with recycling, and undermine plastic reduction eﬀorts. These forms of waste treatment are a one-way use of fossil fuels and plastic, whereas any recycling that does happen replaces virgin plastic production.

The Human Cost of the Global Plastic Waste Trade The livelihoods of millions of people worldwide depend on collection and recycling systems. Wealthier societies like the US and Europe tend to recycle more of their own high-quality plastic domestically and export low-worth plastics to Asia, burdening these countries with the occupational and environmental health hazards that arise from processing these materials. In general, recycling operations are challenged by low plastic quality, competition against cheap virgin plastic, and lack of transparency and accountability for exporters and plastic manufacturers.

Toxicity and Environmental Injustice
Thousands of chemicals are added to plastics to deliver diﬀerent characteristics, such as stability, flexibility, and so on. Some are known toxics, risking recycling workers’ health.
In some countries, collection and processing of low-grade plastics for recycling is carried out largely by the informal sector (often called wastepickers and recyclers). Such workers often face no labor or environmental protections and usually only have access to poor quality equipment. This leads to pollution and dangerous conditions.

GAIA January 22, 2018 4 Without significant intervention, by 2050 plastic production will represent 15% of the global carbon budget.

other linear methods. Not only do these approaches pose a danger to human health and the environment, they enable further fossil fuel extraction to produce even more plastics. Underlying all these possibilities is the specter of much more virgin plastic flooding the global marketplace. Transparency problems and double standards in shipping waste
Exporters often do not know the real fate of the materials they ship or have information on the environmental or social performance of reprocessing facilities.

Although conditions are improving in some importing countries, when the quality of plastic shipped from global north countries to developing nations is low, some imported plastics will end up in dumpsites, landfills or incinerators or “waste-to-energy” plants, or used as fuel in cement kilns and boilers, polluting regions’ air and water.
Despite this, many global north countries still count exports towards recycling targets, and the lack of transparency in shipping has even led to shipment of mixed waste misrepresented as recyclables.9 An Uncertain Future for Plastics Recycling: Opportunities and Threats Exporting countries most aﬀected by China’s recent ban are already pursuing alternatives that would create even more plastic pollution, such as burning previously exported plastics in incinerators and cement kilns, shifting recyclables exports to Southeast Asia, and investing in plastic-to-fuel, plastic roads, and Given the scale of the global plastic waste crisis and the immediate issues resulting from China’s ban, bold and innovative thinking is required.

We must acknowledge that recycling will never be able to absorb the existing and expanding production of plastics, and while eﬀorts to improve recycling are necessary, the primary emphasis must be on large scale reduction of plastic in the marketplace. The chart on page 5 represents two very diﬀerent realities: the “best case scenario” which illustrates some of the solutions necessary to prevent plastic pollution, and the worst outcome if we pursue business as usual.

GAIA January 22, 2018 5 1.Overall virgin plastic production is greatly reduced
Goods in marketplace are accessible to the public and industrial consumers without single use plastic.
All plastic in the marketplace is designed to be nontoxic and reusable, with very limited exceptions. 2. Significant measures are taken to reduce pollution caused by existing plastic
Incineration in any form is discredited as a plastic waste management technique.
Corporate liability policies hold companies accountable for the pollution they have created and the environmental and human health harm they cause.

3. Any continued plastic recycling meets higher environmental and social standards
Wastepickers and informal recyclers have the power to improve materials management, and to integrate into changing systems such as future delivery, with training for new roles.
To prevent countries from being a dumping ground for poorly sorted waste and unrecyclable plastics, plastic waste exports are restricted and ultimately eliminated, and domestic recycling capacity increases. 1.Virgin plastic production exponentially increases
Retailers increase the amount of plastic packaged goods in the marketplace, and consumers have few opportunities to choose products without plastic packaging.

Companies exponentially increase the production of no-value plastic designed with additives, mixed materials, and other components that impede recycling. 2. Lack of accountability and poor waste management worsens pollution
There is increased reliance on incineration, plasticto-fuel, and other false solutions, causing air and land pollution.
Without fear of accountability, companies continue to pollute countries with increasing amounts of single-use, virgin plastic packaging. 3. Burden of plastic recycling processing shifts to countries in Southeast Asia and other regions
Companies continue to make low-value materials that fail to support wastepicker livelihoods and expose them to harm.

GAIA January 22, 2018 CHINA ZERO WASTE ALLIANCE 6 China’s Wake-up Call China’s ban could prove to be a turning point in the history of plastics, either for the better if we act wisely, or with devastating consequences if we do not. While the threat that plastic poses to the ocean is well known, the plastic pollution problem is also inexorably bound to the fate of our climate and threatens irreversible contamination of seafood and drinking water (through microplastics), making the crisis an even greater priority.

Already, some city governments, policy leaders, businesses and citizens are finding their own solutions to plastic overproduction, evidenced by the success of bans and fees on plastic bags and styrofoam, the rise of reusable bottles and other items, and innovative redesign of products and packaging. The message that China is sending us is that we can’t continue to ship our plastic problem away, committing environmental injustice in the process. By confronting industry’s plastic addiction without using recycling as a crutch, we can work towards meaningful plastics reduction.

7Denkstatt, The potential for plastic packaging to contribute to a circular and resource-eﬃcient economy (Identiplast, 2015). 8Calculation made taking global plastic production by 2015 and projections for 2050, and comparing with a 18% recycling rate by 2015 and a 53% recycling rate by 2050. 9 https://www.rappler.com/newsbreak/iq/188654-timeline-canada-garbage-philipp ines, accessed January 12, 2018. 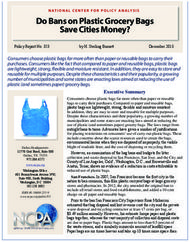 Do Bans on Plastic Grocery Bags Save Cities Money? →

How-To Guide to the Packaging Act for Manufacturers → 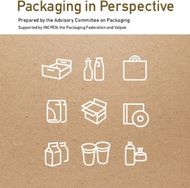 Packaging in Perspective - Prepared by the Advisory Committee on Packaging → 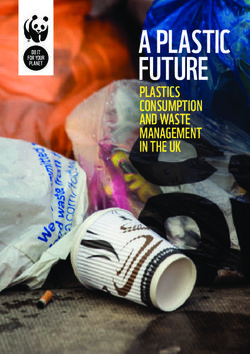 A PLASTIC FUTURE - PLASTICS CONSUMPTION AND WASTE MANAGEMENT IN THE UK →

SAVING THE MEDITERRANEAN FROM PLASTIC POLLUTION → 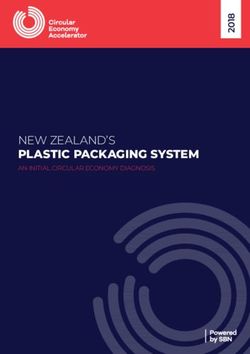 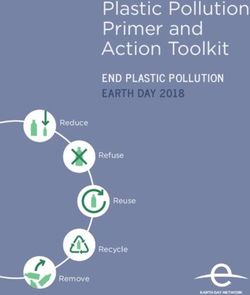 Waste free future - Have your say on plastic bags →

Reducing the impacts of plastic on the Victorian Environment → 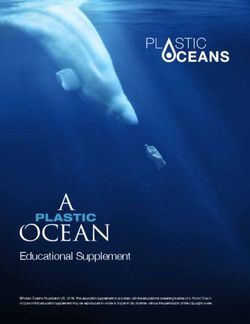 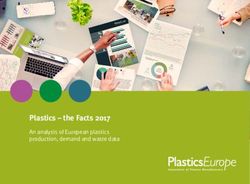 Plastics - the Facts 2017 - An analysis of European plastics production, demand and waste data → 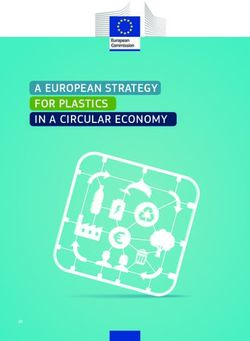 A EUROPEAN STRATEGY FOR PLASTICS IN A CIRCULAR ECONOMY → 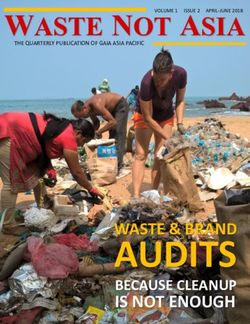 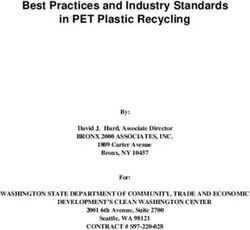 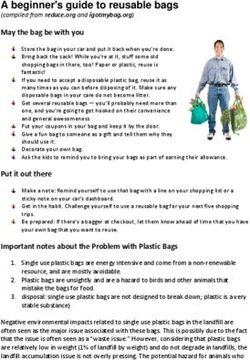